When I was growing up, my Grandparents worked in the horse racing industry and were lucky enough to live in some amazing estate houses in Ireland so I grew up with lots of lovely things around me. My Grandmother was a bit of a collector and she would often pick up ceramics and jewellery and anything interesting that caught her eye from market stalls and shops where she lived. She had lots of pieces of jewellery and I recall many hours spent playing with her jewellery box and trying it all on, starting my love of jewellery from a very early age!

My paternal Grandmother was an artist and having done well at Art at sixth form, I wanted to follow this path but my father didn’t think Art was a proper subject to study at university, despite my protests! I ended up studying English Studies with Creative Writing at University of Exeter but hankered after anything arty the whole time I was there.

During one of my university holidays, my father suggested I did work experience in a bank (he thought this would be a good route for me – heaven knows why when I am utterly hopeless at maths!). It was the worst two weeks of my life and from then on, my father could see that it really wasn’t for me.  We compromised and I managed to get some work experience in my local auction house which was the Livestock market in Salisbury. He thought I would get to see some amazing art but also be able to build a career in the auction industry.  I thought I would be dealing with nice antiques and paintings but I was put in the livestock department to start with and spent my time herding sheep about wearing overalls!

The first time I ever sold something on the rostrum was just before Christmas when I was only 21. The auction house held a Christmas turkey sale – about 900 dead turkeys – and all of the Auctioneers got the flu. I volunteered to take the sale and managed to sell the lot (with a kiss under the mistletoe for each lucky buyer!) and from then on I knew I wanted to be an Auctioneer.

Once I graduated from university, I was offered a full-time job at the Livestock market and this time, I was put in the Fine Arts department. The company had developed this side of the business as a second revenue when problems like Blue Tongue and BSE struck which badly affected

I worked alongside a furniture and silver specialist for about 3 years who taught me the basics of what I know now about antiques. There wasn’t a jewellery specialist working for them at the time and so I began taking an interest in this department and eventually started cataloguing the jewellery sections of each sale. Having worked in a High Street jeweller to get a bit of money whilst I was at university, I already knew the basics of hallmarking and the different style of jewellery from each era.

In 2006, I was really excited to be offered a job as a junior valuer by Duke’s Auctioneers following a chance phone bidding session with one of the directors of Duke’s. Whilst I was with them, I continued growing my interest in jewellery, developing their jewellery sales and continuing my role as a general valuer.

I was involved with some significant pieces whilst I was there including a carved moghul emerald brooch which later formed part of the Al Thani collection, a diamond riviere necklace which sold for more than a quarter of a million pounds (I got to wear it!) and a Polish Renaissance pendant which is now in the Royal Castle Museum in Warsaw. I worked for Duke’s for more than ten years before buying Heirlooms. 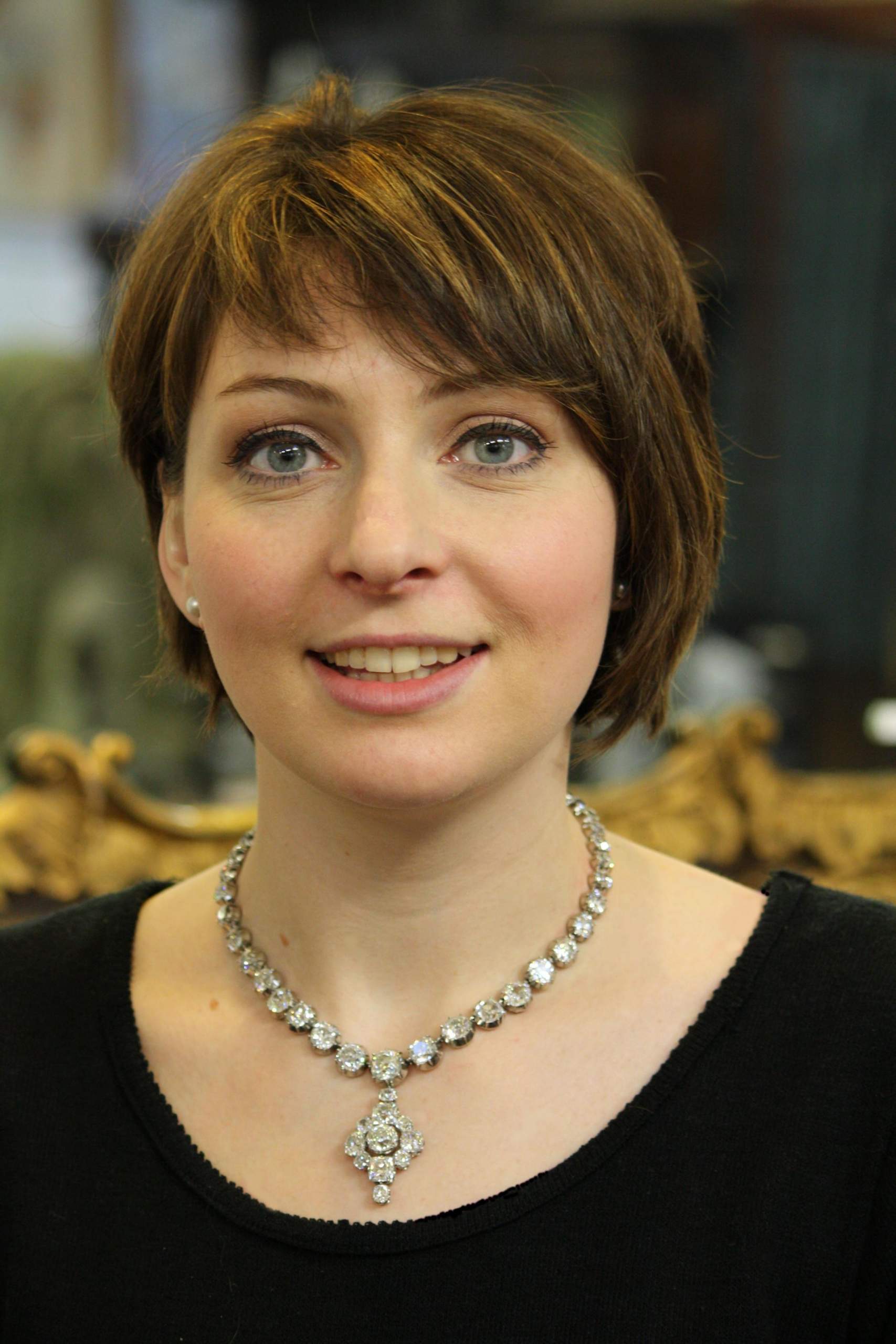 I gained my Royal Institute of Chartered Surveyors status in 2010 and received my Certificate in Gemmology from the Gemmological Association in 2011.

My passion for jewellery continues – I am a member of the Jewellery Historians Society and work as a jewellery valuer for ITV’s Dickinson’s Real Deal. I’m also building my own collections of paste buckles and 18th century Romantic jewellery so as you can see, for me, jewellery is my work and play!